Whatever I promised, here it is:
I am blogging again.

However, the fact that migration is basically over and normal blogging may resume does not imply that anything even close to normal birding would resume here in Michigan in June, as can be seen by the following report.
Okay, you got me again: admittedly, the following report is about half a day's birding with Laurent on the 31st of May and not June 1st, but I think it is close enough to June to make it count and it is not so much about migration than about breeding birds.

Oh, this is getting boring, so I'll stop the introduction and start heading out towards the real post:

Migration may be (largely) over but this is the Great Lakes. Most people will have you think this name relates to the lakes' size. Well, sorry, they are wrong.
Then it would be the "Big" Lakes or the "Extensive" Lakes, but nope, it clearly says "Great" Lakes on the maps.
A few people however know why they are called "Great" Lakes.
I am one of them.
They are called Great Lakes because the birding here is always great, even when those migrant warblers have left us for the juicy spruce budworms up North (silly!).

With the end of bird migration came a significant change in bird-related email exchange. Suddenly no one was talking about woods and warblers anymore, it was all about Dickcissels and all sorts of Sparrows while names like "Point Pelee", "the Arb" and "Crane Creek" had given way to "Scio Church Road", "White Barn Lot" and "Sharon Valley Road".

On May 31st, Laurent and I finally couldn't resist the call of the prairies any longer and we followed the numerous hints and observations of other local birders to the south-west of Washtenaw County where the grassland birds dwell.

After a 20 minute drive, we arrived at Scio Church road which is nice in itself but basically leads to the highlight roads, which are Meyers and Sharon Valley. Upon getting there however, we were greeted by a grim sight. 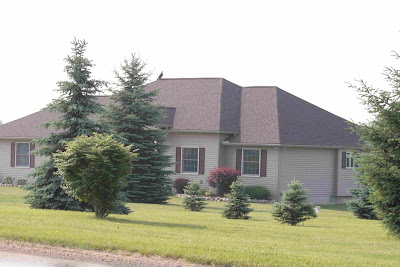 But someone somewhere nearby was in serious trouble, as we could easily tell... 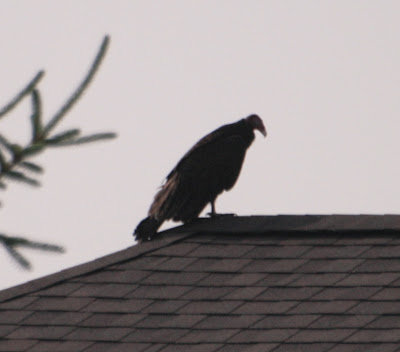 On the other hand, there were so many Eastern Meadowlarks around that we did not take the misfortunes of others as a bad sign. 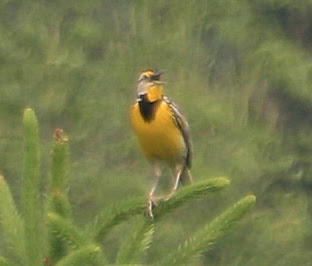 Meyers Road was supposed to have Dickcissel and Grasshopper Sparrows, so this is where we were headed. After checking all the telephone wires and power lines for perched small brown birds with grey on the head and a yellow throat - in vain - we eventually stopped at the southern end of Meyers to give it one last intensive try.

One could say this was a good idea. Brilliant to be precise or rather: one of the best we've had in a long, long time.

Sure, there were two Grasshopper Sparrows singing, of which we were able to scope one nicely. A Savannah Sparrow was not a rare but still nice sight, and a total of two Northern Mockingbirds also were a pleasant surprise. But what was truly outstanding was a little blue bird perched 120 metres away in a small bush: neither a Blue Jay, nor an Indigo Bunting! Well, not much left then and indeed, we were amazed to see a nice male Blue Grosbeak!

This was not only a nice bird, it was not only a bird neither of us had ever seen before, it turned out to be only the (roughly) 10th record for Michigan - ever - if accepted!

Can you believe it? I hope the Michigan rarities committee can.
Well, we couldn't at first, I mean the bird was easy enough to identify, but only the 10th or so record?
Unfortunately, the bird was not relocated by other birders in the days following our observation, but as birding is all about sharing, here is a little manual on how to find great birding spots in south-west Washtenaw County: 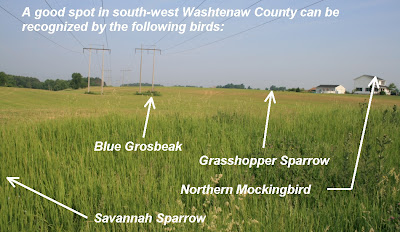 As the Blue Grosbeak eventually flew out of sight, we gained our consciousness back and managed to re-focus on the grassland birds we were still missing: Henslow's Sparrow, Bobolink and Dickcissel.
Those, we knew, could be found along Sharon Valley Road just off Meyers (well, actually Meyers is just of SVR), at the so-called White Barn Lot just before the border to Jackson County.

Strangely, Jackson County came before we were able to spot a white barn. At first we considered turning back but then we remembered that a) we weren't County listers after all and that b) the spot where I had watched Henslow's Sparrows way back in May 2005 was just a few miles further down the road.
So on we drove to Fishville road and my heart rejoiced with lovely memories of times long past and the expectations of a repetition: back then I had parked the car because I thought the meadow looked good for Henslow's, had switched off the engine and there they sang. I walked around the hedge row to the edge of the meadow and immediately was treated to prolonged views of a singing Henslow's just 10 metres in front of me and could watch the feathers on its throat vibrate in song.
It had been very easy.

But would history repeat itself?
Would lightening strike twice?

Okay, so we got there and switched off the engine [check]
We heard a Henslow's sing [check]
We walked around the hedge row [check]
We immediately were treated to prolonged views of a Henslow's Sparrow [aaaand ... check]

This time though, the sparrow was roughly 50 metres off in the meadow but still the scope views were horrifyingly awesome. I did manage a photo documentation which I have included below. You may not get the complete feeling of watching a Henslow's, but you might get an idea - if you are lucky or have maintained a child's fantasy. 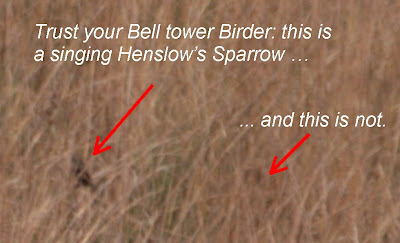 Back on Fishville Road we checked another fallow field to the west where I eventually managed a few rather decent pictures of a grassland special: a Grasshopper Sparrow. There were quite a few singing and we also spotted some of them, which is quite good. 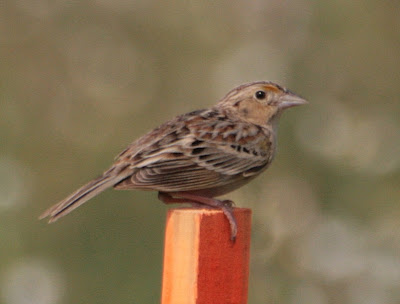 Nice sparrow, but unfortunately not a Henslow's. 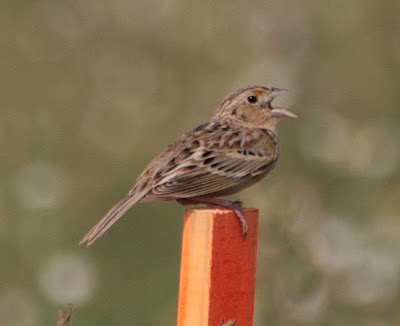 All right, calm down, I won't say it again, promise.
Another unexpected find on that particular field was a Turkey that was just a wee bit too large to be turned into a Bobwhite. 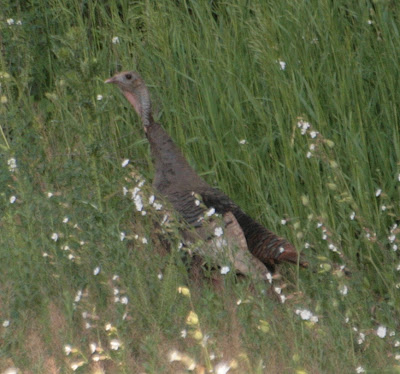 Driving back into Washtenaw County we had the most unspectacular great bird of the day, which is why I will only mention it as unspectacular as it was to convey the complete picture to my inclined readers: a Dickcissel had perched on a fence right besides the road but immediately took off as Laurent slowed the car down and flew on and on and far away out of view.
Hmmm, no comment, and that was that, no more Dickcissels for the day.

But we did find the White Barn lot on our way back and boy, was this a nice and pleasant piece of grassland. Look for yourself and you'll agree, just plain very nice: 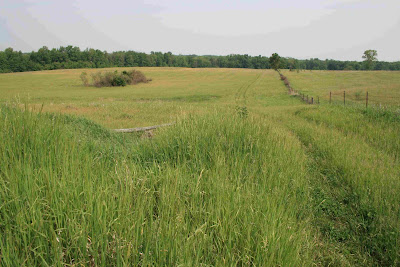 Henslow's may be good - and there was one Henslow's Sparrow singing there too which we didn't see - but Bobolinks can be quite showy as well and sure enough, it only took the time needed to put up a scope until we had excellent scope views of a pair of Bobolinks, our last grassland target of the day. 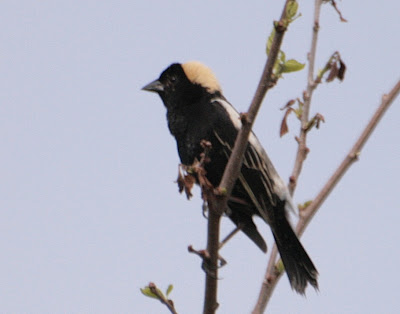 A small wood land preserve nearby had produced reports of a Louisiana Waterthrush and we therefore decided to end our day's birding there. It was remarkably quiet in the woods around noon and most of the birds we heard were Red-eyed Vireos. The woods however were lovely, dark and deep enough to host quite a few Acadian Flycatchers of which several were heard and one seen nicely, so all in all it was a nice addition to our grassland day and we headed back to Ann Arbor at 1 p.m. quite satisfied and with great news (Blue Grosbeak) for the local email forum.

Michigan rocks!
Posted by Jochen at 16:18

Michigan does indeed rock! I have to admit that I'd be a bit taken aback by a vulture on the roof, even though I think they're cool birds in general.

Nice pics of the Grasshopper Sparrow. And a small part of that last paragraph explains why my ears were ringing.

Hi Wrennaissancewoman, I really think Michigan must be one of the most interesting states, right up on top of the list with Florida, Colorado, Texas and the West Coast. It has so much of everything, migration hot spots, a bit of prairie birding, boreal parts and those lovely, dark and deep eastern woods.

Sorry, Corey, hope your ears will be okay (again). By the way, you sure you heard Acadian Flycatchers or was that just me reading your blog and making plans for posts on mine?

Great pics! I love that Grasshopper. We should all get such good looks at such a secretive sparrow.

I am much in favour of this Mike, until it gets chased off the pole by a Henslow's, and all that happening in NY Central Park!

I'm serious, I'll try and convince a few of those sparrows to make the short flight east!