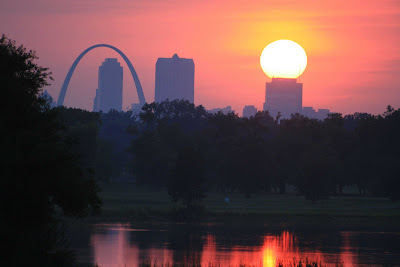 So I am back from St. Louis.
I have actually been back for a while, but then there was work to do, a book to read, a spam-rating to overcome and all these other little snacks that spice up our daily dish of duties. So I am blogging a bit late - again - but am in good hopes of catching up. Not so much because I'll speed up my blogging (you see, work and all these things), but because now that I am back, there won't be that much birding and subsequently not much news to blog about.

Therefore, I have decided to split the St. Louis Story into different parts instead of packing it all into one long, long post, and it is therefore my pleasure to now present to you ...


Lifer 1: Carolina Chickadee
Well, well, the North American chickadees. We, in Europe, might not have wood warblers and the bird species we call "warbler" would be called "sparrow-stuff", "gimme-a-break" or "what-the-heck" in North America.
But then again, we have our tits, real beauties.
You see, the members of the family Paridae are called after their calls, and while the North American species all call "chicka-dee-dee-dee" or "Tufted-tit-mouse-mouse", the European members just call "tit, tit, tit".
And while European tits are great to look at, the North American forms are somewhat less attractive at first sight.
These are the main differences.

However, the North American species fall into a category that has its very own and peculiar attractiveness to birders and due to falling trees while eating mushrooms, a nice essay has been written about this category here which makes further explanations on my blog unnecessary for the moment. Just a few words: some of those chickadees are truly birder's birds!
Like the Caroline Chickadee, about which I will tell you a few things now.

There I was in Missouri, freshly arrived and full of hunting spirit for a few lifers, when I ventured out into the immense artificial wilderness of the Shaw Nature Reserve / Arboretum. Mind you, this really is a nice place when you just forget it wasn't born this nice but made this nice by man, and the birding was quite exquisite, as will be seen in a later post as well.
I had entered a small wooded ravine that would lead me down to the lowland forests along the larger river of which I have forgotten the name, and it was there I hoped to seek and find my main target species of the day, Yellow-throated, Kentucky, Prothonotary and Worm-eating Warblers. Little did I realize that my first new bird would be of a different kind and lurking just around the next corner of the path, when I went around the next corner of the path and was confronted with my first new bird for the trip by following a familiarly unfamiliar song. This indeed is not contradicting myself, it just means that I had never heard that song out in the wild but had familiarized myself with it through listening to bird song CDs.
So I knew what was coming my way, but still enjoyed a moment of great astonishment: all winter long I had tried to find a Carolina Chickadee amongst the Black-capped Chicks of Michigan - in vain of course or I would have chosen another headline - and always imagined it to be really hard to identify.
Well, it really wasn't, to be honest: at the first sight of the birds, a small party, it was clear and obvious that I was looking at something completely different: smaller, shorter-tailed, drabber etc., all the field marks were there, obvious and easily perceived and in combination with the song, there was no doubt I was looking at Carolina Chickadees for the very first time in my life.

Here is the breeding bird survey data for the Carolina Chickadee, and as can be seen, St. Louis is right on the edge of it, still inside its range, but just marginally so.
According to this, however, St. Louis and the Shaw Nature Reserve are right inside the zone of overlap or even within the range of the Black-capped Chickadee.
And if you look at the breeding bird survey data of Black-capped Chickadees here, this latter picture of its distribution is really the truth.

When I got back to the car and re-listened to the Carolina's song on my CDs again, I noticed that typically Carolinas have a four-syllable song. The once I had just seen and heard however had only a three-syllable song. An intermediate song however doesn't necessarily mean I had seen a hybrid as songs are learned in chickadees and a rather pure Carolina might therefore still mumble intermediate songs.

Sometimes, frustration can be an unpleasant thing to feel.

A few days later, while birding Castlewood State Park, I encountered a few chickadees again and was able to secure the following documentation - I won't call them pictures as I had to use ISO 1600 to get somewhat sharp images. 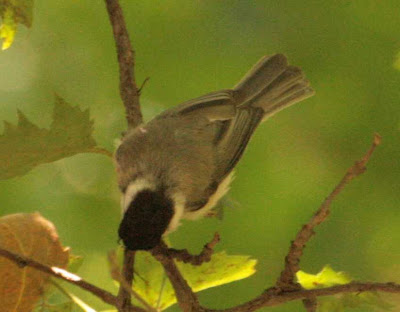 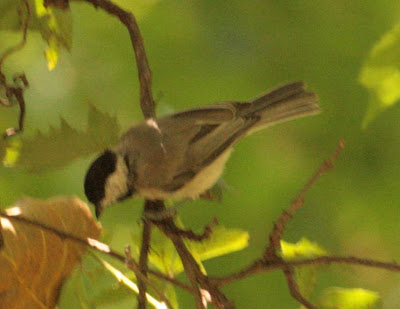 Now, if we check our copy of Sibley's or do some reading on the Internet, e.g. here, here or here, it seems that at both places where I encountered chickadees closely enough to take a thorough look, they were closer to Carolina than to Black-capped.
In fact, I had difficulties even finding a single typical Black-capped feature on the birds except for their intermediate song.
So for the sake of my own personal satisfaction and as this is a blog about a hobby birdwatcher and not a scientific publication / research project, I have decided that those chicks were good enough to appear as Carolinas in my book.

So this was it, the tale of lifer No. 1.
A bit fishy maybe, but i was fun and that's the most wonderful thing about birding anyway.
Posted by Jochen at 00:31

I've lived in Carolina territory for most of my birding career, and I can assure you that they come off with all sorts of songs in addition to the typical four-note whistle you hear on CDs. I've heard them sing five-note songs and even songs in which they replace some of the notes with buzzes.

I've had relatively little field experience with Black-caps, but I've found their slow, low calls to be very different from the fast, high-pitched calls of Carolinas -- always. Songs may be learned, but perhaps the calls, if innate in this case, are more useful?

Anyway, it seems that recently the Carolinas may have started pushing north in Missouri, and the Missouri Bird Records Committee is seeking evidence of a shift in the previously stable contact zone that occurs across the middle of the state.