There are positive and negative sides to living in a high rise building in downtown Ann Arbor. The negatives are a general lack of biota and an abundance of concrete. The positive sides haven't revealed themselves to me yet but must be around somewhere and can't stay hidden forever.

So this post will at first be centred around the concrete and asphalt aspect.

When you haven't been outside for a while except for medical institutions' waiting rooms or shopping malls and grocery stores, this view from your bedroom window (admittedly the picture was taken in April) towards the Burton ("Bell") Tower does not provide an amount of refreshment one would call copious. 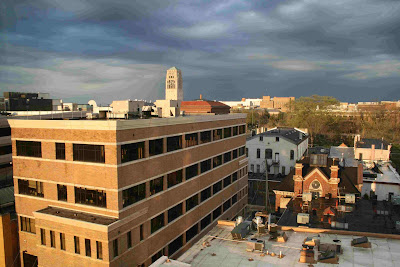 And when turning your head to look up from the laptop monitor in the living room towards the outside world, the Maynard Parking Structure doesn't feel like viewing Victoria Falls anymore when you've not been birding for a month or so. 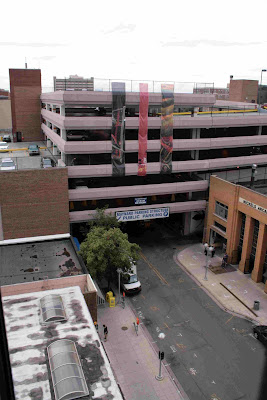 So I knew I was in trouble and needed help, but could not see a way out of it - literally.

Gratefully, I am a birder and have friends in high places - again literally - and these friends hadn't seen me for so long they felt it was time to send someone over to my place to see what was going on.

And so it happened that I looked out of my window over to the Maynard Parking Structure last Saturday trying to conjure images of Yosemite National Park when I discovered that - to my amazement - one of the Bell Tower Peregrines, the male, had come to call. Well, it wasn't calling, but I have recently read a few of Sir Arthur Conan Doyle's Sherlock Holmes stories and liked that particular expression. So there it was, for the first time in 9 months perched upon the top fence, looking at me as if it was wondering why the heck I hadn't been out chasing birds in a manner similar to his but more sustainable for so long. 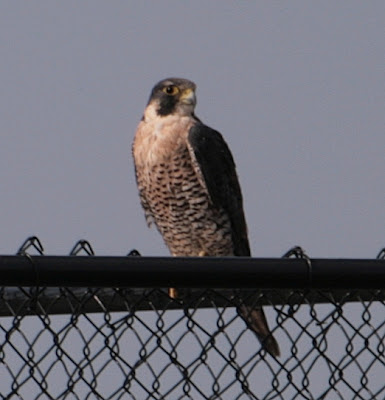 That's why I like birds: true friendship you can count on.

A pretty neat view all of a sudden that was, out onto the parking deck.
But now that I have a camera, my expectations aren't easily surpassed by the wildlife around me anymore, and I was hoping to get some action packed shots of the falcon, like of it stretching its wings, scratching the ears or other exciting things birds do when they aren't just sitting on a fence on top of a parking structure.
Quite possibly, a high rise building doesn't inspire a Peregrine to anything beyond staying perched.
Possibly, a downtown area isn't to a Peregrine what Disney World is to a kid or rather,
very likely there just wasn't anything exciting enough to penetrate the receiving sensory nerve cells of the Falcon and touch its cerebral system in a way that caused it to do anything else but maintain body temperature and heart beat.
Whatever, here are the two most action-packed pics I got in about 20 Minutes ... 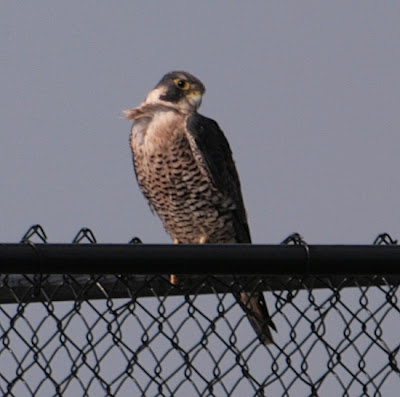 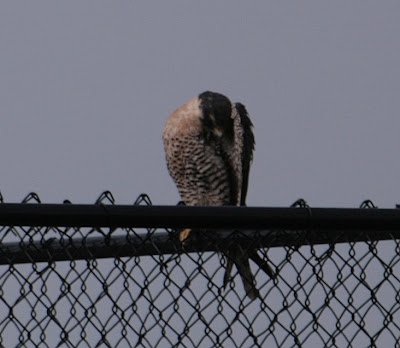 Admittedly, this short episode was not the kind of birding you'd get along Manu Road, but then again, and this may seem hard to believe, downtown Ann Arbor just isn't Peru.

I was still rather happy about the encounter and promised the bird to go check out the passerines with him soon again.
I hope I get to keep my promise.
Posted by Jochen at 22:44

wow - you are LIVING THE LIFE my friend, living the life:))

Just wait until a breeding pair settles in at Littlecote Nature Reserve...

Wonderful birds they are-I rarely get to see them in Connecticut and am always excited when I do see one.

They are great. We do get to see them on the German Baltic Sea coast as well, mostly migrants, but no matter how often they dash by, they never fail to impress.