Mike over at 10,000 birds recently wrote something very remarkable about the Bicknell's Thrush:

It is a birder's bird.

Being the huge Catharus-fan that I am, this was ... well ... something that struck me as a very nice and fitting description of the whole genus: birder's birds.

What are birder's birds?

Generally speaking, birder's birds are birds only a birder would consider worth birding for.
Oh well, okay, it's better explained with a few examples:

This here is NOT a birder's bird. 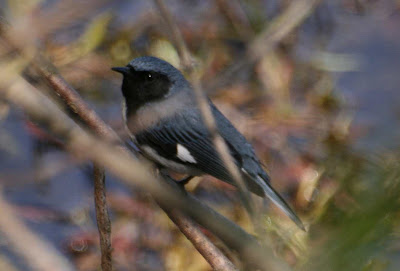 Don't get me wrong, birders will invariably love this species, but it is not a birder's bird as also non-birders will find it nice or at least understand why anyone would find it amusing to look at such a creature.

This on the other hand, is a birder's bird. 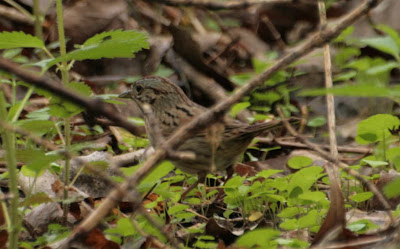 Unless you are a birder, you won't find any reasons for bothering to even raise a skeptical eyebrow at the sight of this bird, let alone consider taking a fully-grown and extensive look at it. It's just plain brown boring to most people.
Birders however see beyond the looks and look deeper than the pigments on the bird's plumage. They go for the true qualities in life, like rarity for example. They value species simply because they are aware of the difficulties that need to be overcome when trying to catch a glimpse of it. They take geographical factors into account as well when deciding if they like or really like a certain bird species , like endemism or restricted range.

All these qualities are elusive to the non-birder's eye and they therefore simply don't get it: these brown jobs can be amazing!

And the Gray-cheeked Thrush is right at the heart of the amazing brown bird bunch. It's just plain great if you're a birder!

When I first visited Michigan and Ontario in May 2005 I was delighted at finding a few Hermit Thrushes and a Gray-cheeked Thrush at the Arb in early May. These were my first encounters with Catharus thrushes and it was great. I later learned that Gray-cheeked Thrushes were rather scarce migrants at the Great Lakes and sure enough, I only saw them on one more day at Point Pelee, whereas the other species were seen in relative abundance. It was therefore with some surprise that I saw Gray-cheeked Thrushes again ... at Ontario's Rondeau Provincial Park at the end of May, with three individuals!

I know I shouldn't have done it back then and I should avoid it now as well, but I can't help it, it's in my blood and I may beg you to forgive and not condemn me for it:
this strange occurrence of the Gray-cheeked Thrush, with two apparent peaks in early and late May, made me think.

And here are the results of my thoughts.

This impression of two spring migration peaks of the Gray-cheeked Thrush was not only verified in May this year, it is also evident when looking at long-term monitoring programs, like eBird. Take a look for example at the great diagram of the Gray-cheeked Thrush occurring at Ohio's Crane Creek State Park as seen at eBirds here ( unfortunately I can't link directly to certain diagrams, so you'll have to type in the information provided on the link yourself by "starting over". I have however maintained the links so you have the basic information I used, like location and species).
Admittedly, these two peaks are not obvious at all of the hot spots, e.g. this is the graph for Point Pelee, but as this is a blog post and no Science Magazine contribution I still think it intriguing to have these two peaks in spring and fall in Ohio.
If you have two distinct peaks in fall, these can often be explained by different migration strategies of adult and young birds. But in spring, two peaks for one species are kind of unusual.
So at first I figured this might be caused by different migration timing of the two distinct populations, the one breeding on Labrador/Newfoundland and the one breeding West of Hudson Bay. To get an idea if this might be the reason for the two peaks, I looked at other migrant bird species with a comparable range that is subdivided by Hudson Bay. The only species I found were American Pipit and White-crowned Sparrow, although both are not migrating as far as the Thrush and even winter in the southern USA. Nevertheless, I thought a look at their migration pattern might be worth the effort.
Here is the migration pattern of the American Pipit at Metzger Marsh, right next to Crane Creek, which supports higher numbers of that species than a board walk through a forest.

And here is the White-crowned Sparrow diagram for the Crane Creek board walk.

Now that's intriguing. So possibly the two peaks of Gray-cheeked Thrush and White-crowned Sparrow can be explained by the two populations on either side of Hudson Bay.
Well, it would have been too easy to be true. I don't know about the thrush but at least for the sparrow, this seems unlikely. In comparison to the Gray-cheeked Thrush, the populations of White-crowned Sparrows around Hudson Bay look reasonably different and can be identified in the field - at least according to Sibley in which I place my trust here, lacking any more detailed literature on the matter.
Birds west of Hudson Bay show pale lores and an orange bill whereas those east of the Bay show dark lores and a pinkish bill.
And the Great Lakes migrants during the two peaks?

All pink-billed-dark-lored-Eastern-Taiga White-crowned Sparrows. Although I specifically checked them, I never found a single Western bird in both spring periods of 2005 and 2007. This one is a nice example of an East Taiga bird, taken on May 12th at Point Pelee. 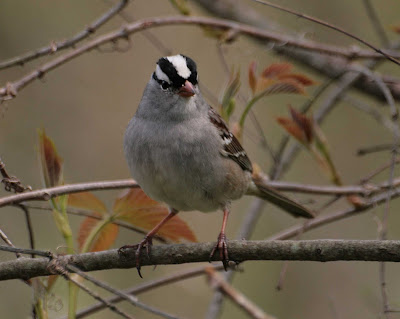 Bad news for my Gray-cheeked Thrush citizen science project.
Or good news, who can tell?

Because there is yet another distinct population of thrushes once included within the Gray-cheeked forms, and that's the miraculously enigmatic Bicknell's Thrush. Now I know this thrush is supposed to migrate along the coast and this is probably well supported by ringing/banding data. But hey, why shouldn't one of the peaks, presumably the last one, not be caused by a certain percentage of Bicknell's migrating East of the Appalachians?

Because there are no ringing recoveries and no birds banded at Great Lakes bird banding stations yet?

Good point. Very good point indeed and entirely true. But - just for the fun of taking this a bit further - not entirely satisfying.

To investigate the matter just a little more, I examined the photos I took of Gray-cheeked Thrushes to see if I could spot any differences between the early and the late May birds.

Of course I couldn't.

The simple reason is of course that all very, very likely belong to the same taxonomic unit (non-Bicknell-unit) and that there simply are no differences.
The less simple but more frustrating reason is that no one currently can really identify Bicknell's by plumage alone anyway, so I knew right from the start it was rather pointless.

Nevertheless, here are the pictures with a few comments. 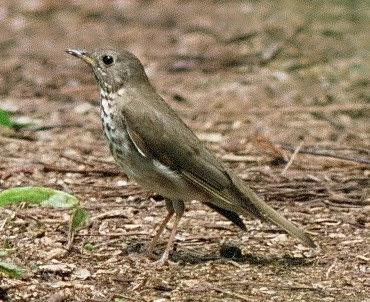 This bird was photographed on May 10th 2005 at Point Pelee. It is a digitalized slide, so it is quite grainy. The primary projection exceeds 100% easily, the bill looks rather dark beyond the nostrils and the cheeks might be a bit stripy. Nevertheless, there appears to be a hint of half an eye ring. All in all though, this appears to be quite a classic Gray-cheeked Thrush. 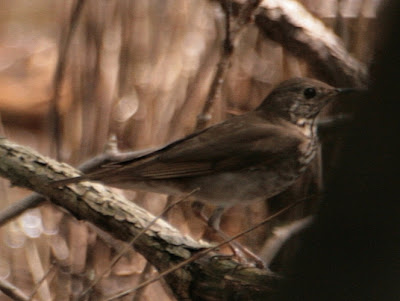 This bird was photographed exactly two years later, on the 10th of May 2007, at Crane Creek. Long primary projection, blackish bill, stripy cheeks and lack of even a hint of an eye ring make this a typical Gray-cheeked in my opinion. 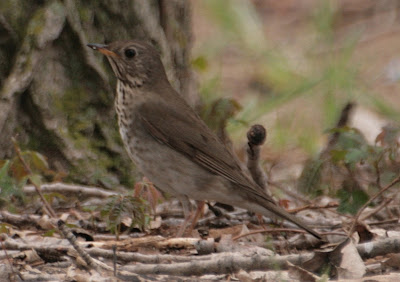 But then there is this bird, another individual photographed on the same day at Crane Creek. Primary projection and cheeks are fine for Gray-cheeked, but then there is this pale half of an eye ring and the bill is pretty orange as well at the base. No candidate for a Bicknell's for sure, but suddenly our confidence in some of the tentative field characters of Bicknell's is gone - if ever there was any confidence. 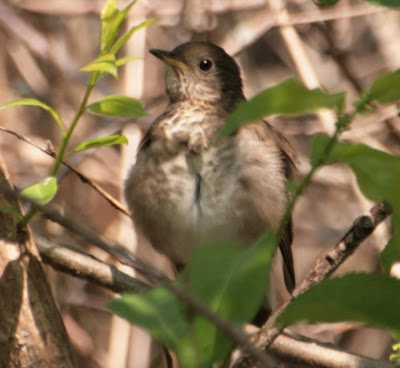 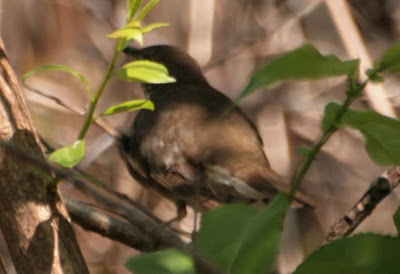 These two shots of the same bird are from Crane Creek and were taken on the 22nd of May, during the last peak. Cheeks not very stripy, bill shows a lot of orange, there clearly is half an eye ring, and we're puzzled. Sadly the primary projection never revealed itself to us - thanks, leaf, old buddy - but it was a rather large bird and the tail and primaries should be a bit more contrasting reddish in a typical Bicknell's. But still it makes me wonder: can we safely presume this is a Gray-cheeked Thrush? 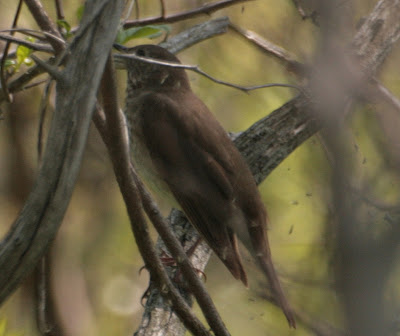 One day later, 23rd of May, at Ontario's Point Pelee. Primary projection might be a bit short but cannot be assessed with any certainty due to the wing's position, bill rather extensively orange at the base and half an eye ring present but contrasting reddish tail and primaries lacking and the cheeks are obviously "peppered" and not plain brownish as in typical Bicknell's. Anyone dare a guess?

The Gray-cheeked Thrush has once again proven beyond doubt that it is the true birder's bird, the champion amongst the lousy brown jobs. And I sure hope to see plenty more of them, but please, not as a vagrant on the German Baltic Sea coast. It would be too frustrating to find a Catharus thrush in Europe and to not be able to know if it was Bicknell's or Gray-cheeked, no matter how good the looks at it are.
A nice Swainson's Thrush would be better by far and I will leave my life Bicknell's for a foggy morning on a Catskills Mountain peak with a few fellow bird bloggers to celebrate with.

And next time you see a Gray-cheeked Thrush in late May around the Great Lakes, you might just want to look the other way and sneak off to a whistle of this tune until one day more is known and we'll be able to cheer to this tune at every sight of a Catharus thrush!
Cheers, here's to that!!
Posted by Jochen at 16:29

Jochen-I always enjoy reading your posts on birds.Your posts are some of the most informative.-I have tagged you for an eight random facts Meme-Go to my last post for details if you would like to participate.-thanks

Well, Larry, I have participated as you may have noticed. No retreat, no surrender and you asked for it!!