A New Room With A New View

The Bell Tower Birder has moved.
Not to Germany, at least not yet, but to a hotel on the outskirts of Ann Arbor.
Those who may care to wonder may wonder how that came to happen. Well, it has something to do with fulfilling lease agreements, redeeming a deposit and all of that crappy uninteresting stuff you don't really want to know. At least I didn't want to know but I had to as it all pertained to my own fate, so I do know now or at least have a rough overview of the situation, but it is too complex to explain here, so I just toss it to you like this: me and my lovely other half moved to a hotel on the outskirts of Ann Arbor where we'll be residing until our return to Germany in a bit less than three weeks.

Well, it is not so bad. Here's a picture of my new work space. 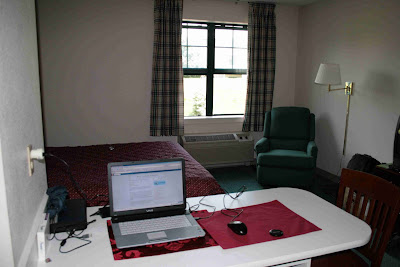 I do miss the big panorama windows we had at our downtown flat, but in front of the window, invisible to you due to my inability to take proper photos, is actually a bit of grass and I can see three trees, none of which are native I guess but they are better than the Maynard Parking Structure. The hotel is right next to an Interstate, so even though the "rocky gorge" impression of downtown is gone, the background noise is reminiscent enough of a waterfall to still make me think once in a while I am residing close to Victoria Falls.

As this is an Extended Stay Hotel and we are here over an extended period of time, our room gets cleaned by hotel staff once a week. We got to choose which day we want that to happen and chose Monday, quite randomly I confess. So there I was this morning happily writing on my reports when the room cleaning staff knocked on the door and I had to vanish for about an hour. This was necessary so the lady was able to clean the room properly and check our belongings for things worth gossiping about.

What does a birder do with an hour's time to spare?
Well, go birding I guess and so I took off to do just that.
And I must say, this wasn't so bad after all. I surely found again that not all the places in North America are like Point Pelee, but hey, I am going back soon, so any North American bird species is worth a good look.

This is our hotel with a nice pond in front of it, the highway is behind the line of trees on the left. 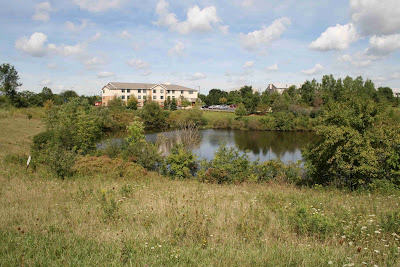 The first hotel bird was a European Starling, surely to get me in the right mood for my return to Germany, but native species were soon to follow - not after the second species was logged though: House Sparrow.
Walking around the little pond, I was pleased to see 2 Green Herons, depicted below. 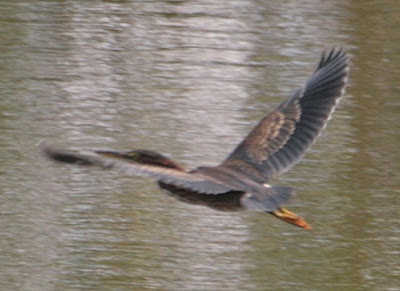 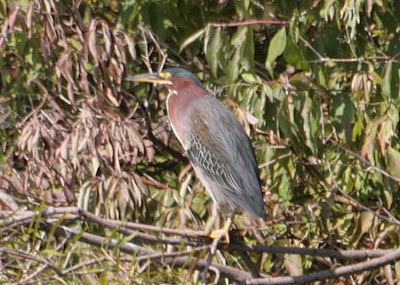 I also flushed - darn, I hate to flush birds, makes me feel like the unwelcome intruder I am - a Great Blue Heron on the same pond and had a fly-over Great Egret. 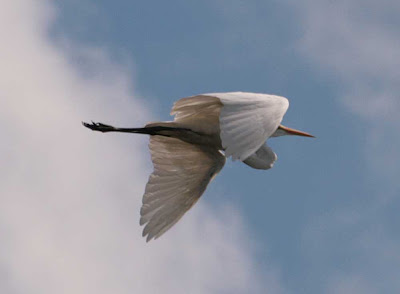 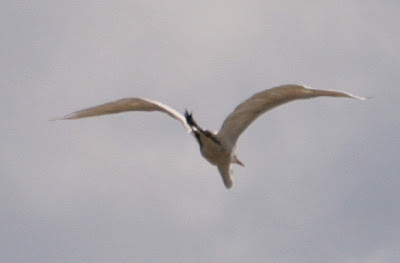 This isn't really bad at all.

Other species were also present, like Blue Jays, Northern Cardinals, Common Grackles, Song Sparrows, House Finches and Mourning Doves, but none posed as obligingly as these two American Goldfinches. 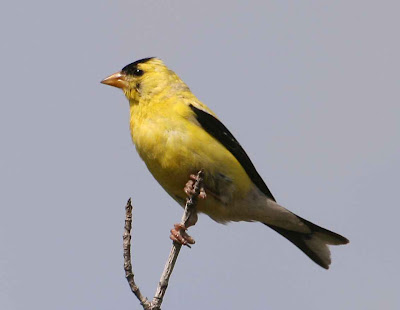 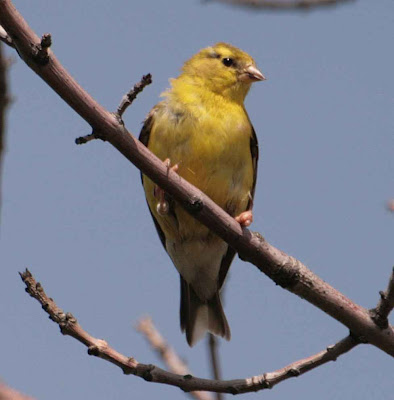 The second pond held the star bird of the day, a species I haven't seen more than - say - 10 times during my year in Ann Arbor, a Belted Kingfisher. 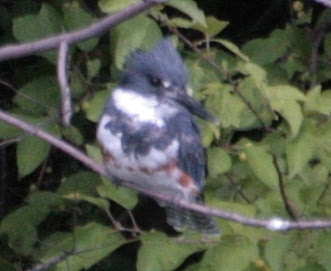 I know this is a crappy shot, but then again, I presume you haven't come here to view excellent pictures anyway, so take it for what it is: a ... well ... picture, alright?

Turning away from the ponds, we can see this: 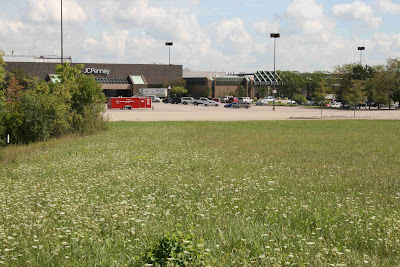 The parking lot of a Shopping Mall, in other words:

The problem was apparently that Ann Arbor has done so much to improve the status of Ring-billed Gulls by building a multitude of Malls that the birds are constantly scattered over vast expanses of habitat. I therefore was only able to find 2, one of which can be seen below. 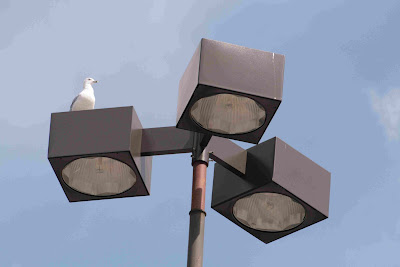 I'd love to present my hotel list now, which I am sure stands at 20 species after just 1 hour of birding the surrounding, but my bird guide is somewhere I can't find it now, buried deeply in the vaults that are my half-packed luggage, so I can't. But take my word for it:

I may be away from the Bell Tower, but that won't stop the birding!
Posted by Jochen at 18:57

You found a lot of birds for being that close to a highway and shopping mall. A2 does have those little environmental pockets, still - and I hope never loses them despite the march of progress.

Will your blog still be called Bell Tower Birding when you are back in Germany?

Hi Wren,
yes, A2 surely has a lot of potential for city birders dependent on "The Ride" to get around. We can only hope that these pockets are valued by the population and its representatives alike and will thus be around for a few decades more of progress.

I am likely to keep the name Bell Tower Birder. There's Bell Towers in Germany as well and there's also falcons breeding on most of them (Common Kestrels), so it's okay to keep it.
In the long run however, I might make quite a few changes and additions, but we'll see about that.
Hope you'll still visit when I will be writing about White-fronted Geese and White-tailed Eagles instead of Cardinals and Indigo Buntings!

Are you sure your fate didn't have anything to do with your refusal to call a "flat" an "apartment"?! :) Hehe.

I have to confess that it has just dawned on me that when you're talking about returning to Germany, you mean for good instead of for a visit! I will still visit you of course... maybe I will finally figure out what the "bird that likes to walk in the road" was.

Hi Rurality!
Well, the place I was living in was both: it was a flat apartment as the ceiling wasn't very high!
And I think we definitely will have to work on your "bird that likes to walk in the road" was, I will supply you with as many pictures as I can and pay extra attention to any birds walking on roads...

I'll still read as long as you're blogging in English. I'd be embarassed to tell you how badly I did in my one German language class years ago.

Don't forget to take pictures of some European Wrens, too.