How To Be A Quite Good Bird Photographer: Part 1

One of the side effects of participating in the Nature Blog Network is that one is tempted to get more competitive about blogging.
My blog's current ranking is a low down 71 but if we only look at the blogs that matter - those about birds - I'm on 30th place with 26.6 average readers.
Just for the record: I don't think my readers are average, but if Nature Blog Network tells me so, there's not much I can do.
The leading bird blog is 10,000 birds (no surprise there, really) with 881.2 readers.

All I need to do to take the lead therefore is recruit 855 more readers a day and tell those 0.6 readers to either grow up or at least take a few buddies along.

That doesn't sound impossible at all - I thought - if only I had a small idea that was so great and unique or even - gasp - useful that it would draw said extra readers to my blog.
And then it occured to me:

I am going to do an occasional series on bird photography!

I think this is a great idea and I am so incredibly surprised that I am apparently the first one ever to come up with such a concept, seriously!
Well, some may say they've seen this before somewhere in the bloggosphere and that they know a certain someone who's done part 1 and 2 of a similarly named series, but I tell you this is nothing more than pure coincidence and who'd you rather believe: a loving father or someone who occasionally even associates with people who are unkind to kittens?

Anyhow, here is my little post on bird photography:

Capturing The Black Birds' Black Eye
One of the most important features that may turn a booming bird pic into a big bust is the bird's eye. It is actually so central to the picture's quality that it should be the prime target area for your auto focus, but even if the eye is crisp and sharp, it may still ruin your shot!

Why? Very simple: most bird's eyes are either black or appear black at a distance. Some birders might surely be fond of Venice's Carnival and take an eye that's a lifeless black hole as art, but most will surely want the birds on their pictures to burst with life, and this is mostly achieved by a simple yet vital effect of sunlight being reflected off the bird's eye!
The importance of this tiny effect is best shown by the following series of pictures. The series further shows that it is this particular effect that makes the photography of black birds such a challenge as a missing sparkle will not only make the eye seem lifeless, it will make the eye (seemingly) disappear altogether!

This is how we like to see our little darling Red-winged
"the voice" Blackbird on a photo: jet-black plumage, red
wing coverts all fluffed up and a sparkling eye reflecting
the sun. 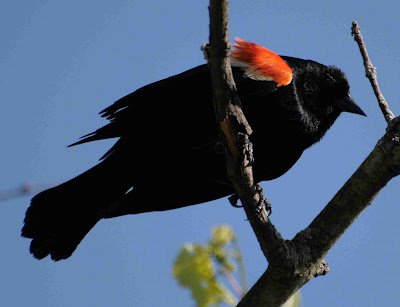 Just a little twist of the head however would turn this into
a nasty twist of fate if it were our only picture of the bird:
all it takes is a little shadow on the eye and a featureless
black form is all that remains of the bird. A big nothing,
no picture but just a mass of I's and O's to give our delete
button something to do.

But this post would still be pointless if all I wrote about was a bit of light on the eyeball of a bird. Nope, that's not all, there's something else:

The bird's nictitating membrane.
Even if wikipedia might tell you otherwise, the nictitating membrane is a special device birds use exclusively to make life hard on us photographing birders by turning their lovely vivid eyes not only seemingly dead as the missing light reflection does.

The nic'mem's pale veiling effect is that of the living dead!

The maliciously sneaky part of this device is its speedy application: we don't notice the nic'mem's closing during our photographing the bird and it is only back at home that we find all our presumed excellent pictures worthless. Had we only noticed out in the field, we could have taken a few extra pictures to overcome the bird's wits, but the bird eye's speed was beyond us and yet again, we lose.

This problem used to be frustrating during the times of analog photography when each picture meant money, but with the onset of the digital age, there's a simple way to avoid it:

Wait for the eye to sparkle and then fire away merrily!

So unless you want to supply evidence of the continued survival of Terror Birds to Cryptomundo, a few extra shots and a double-check on your pic that the bird's nic'mem' is drawn back might be of help. The next picture shows the very same blackbird, with a deathly beamless zombie's eye courtesy of its nic'mem': 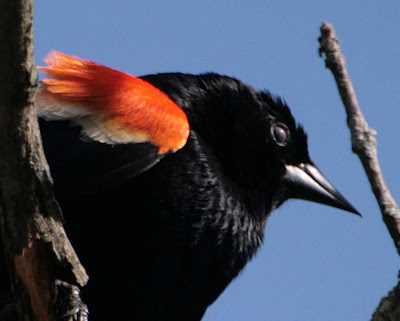 Odd, insightful, a hint of madness, a soupcon of genius - Jochen is back! Hurrah...

You may not be the first to cover "quite good bird photography" but I don't believe anyone has bent Thriller lyrics to this particular end. Thrilling!

And thanks for the vote of confidence. Competition on the Nature Blog Network is fierce!

Mike, as you say, competition is fierce and Thriller lyrics might just get me that extra 855th google searcher.
I am still working on a bird post that contains the words Paris, Hilton, Pitt, Titanic, Star Wars, Tax Refund, Iraq War, Disapproving Rabbit, double-breasted Tit-Grabbler, and Potter.

Mwahahahahaaaa (again, a citation from the "Thriller" lyrics)

I'm glad to know that photographing the blackbird's eye is a universal problem.-I thought it was just my problem.

this is great and a fellow blogger and myself keep on saying that it isn't a competition but then again doesn't it feel that way? I am just happy to learn about many new blogs that I never knew about before and yes, you will always have my views!

Larry: yes, it seems to be a common nightmare and Crows are even worse than Blackbirds as they don't allow you to approach that closely! Even though this is such a common bird, I still don't have a single picture of a Red-winged Blackbird I'd call decent, such a shame! This species is a constant challenge (well, not that much anymore here in Germany, but you know what I mean...)

Mon@rch: NBN has led me to a few nice new blogs (have you seen Great Auk? Pretty excellent!) but seeing myself at position 70-something does sparkle a bit of competitive thinking! It's great fun though and with all those owl pictures, you bet I'll be a regular to your site!

I'm hopelessly lost down at the bottom of the list though. I mean, I missed IatB which is up at the highest-ranking blog in NBN now! Imagine the hits I could have gotten today!

That's interesting-I get RW- Blackbirds right in my backyard and the eye problem has prevented me from getting any great photos.