On problems you never knew existed

Anyway, on a compleeeetely unrelated note, I got asked (! can you believe it) to join the panel of the miraculous 10,000Birds Clinic:

“Got a question about bird ID, birding best practices, or hotspots across six continents? Ask 10,000 Birds!“

Good idea in general if only the whole concept wasn't doomed due to a single weakness in the performance of the clinic's human resources department, but incredibly, this is what Charlie had to say about me joining, and please, my name is Roeder, Doctor Roeder:

Well, I spent all weekend googling "Jochen Roeder extremely knowledgeable" but couldn't find anything that made sense, so I presume Charlie's sentence does pertain to my humble ability of holding a pair of binoculars steady for more than 15 seconds.

That qualifies me to solve (or was that dissolve?) other birder's identification issues? Feel the pressure.

Thriving to live up to my newly acquainted reputation as an "extremely knowledgeable" birder, I have decided to dedicate this blog posting of mine to providing insights into one of the fundamental yet largely overlooked problems of bird identification:

Ageing Black-headed Gulls in Spring
Possibly this post is not due to there being a serious problem but to the fact that this is a) just about the only bird species I got to see lately and b) take decent pictures of, but then again, maybe there is a problem and this post may come in handy.
Okay, picture yourself amongst the seals on the beaches of Cape May on a stormy spring day, returning towards the lighthouse after having grown tired of all the Red-throated Loons around the famous concrete ship. Yes, these situations happen now and then. You have heard there's an immature Black-headed Gull around and of course, that's on your wish list before enjoying some hot tea and possibly a lobster or two in the evening.
Suddenly, you spot this strange-looking gull standing amongst the Ring-billeds on the beach in front of you, raise your binoculars steady for more than 15 seconds and sure enough, a Black-headed Gull. Great and congratulations, with the only problem being that this bird shows a completely dark brown hood, a dark bill, no brown feathers on the wing coverts and the tail clearly is all-white with no traces of a black terminal band. Ooh, nice, an adult, can't be any clearer than that, so there must be two birds around and we are talking about a major influx to the area!
Well, this may be the case but then again, it also may not and aren't you glad you read Belltower Birding before you walked amongst the seals on the beaches of Cape May on one stormy spring day?
The following pictures were taken around Stralsund in the last couple of days (except the first one which is from a while back now) and demonstrate clearly that sometimes, ageing this two-year gull can indeed be not completely straight forward.

Here we see an adult winter Black-headed Gull: largely white head with only a few darkish spots and stripes, red legs, and a red bill with a blackish tip: 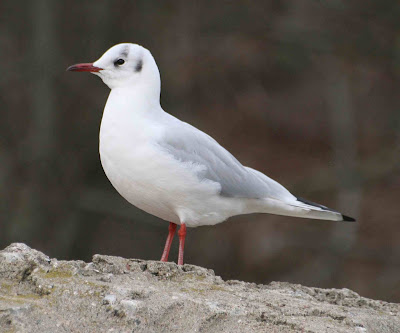 Truly nice.
By early April, most adults will have completed their moult into breeding plumage and show the nice and crisp blackish-brown hood we can see here, together with almost blackish legs and an equally blackish, uniformely coloured bill: 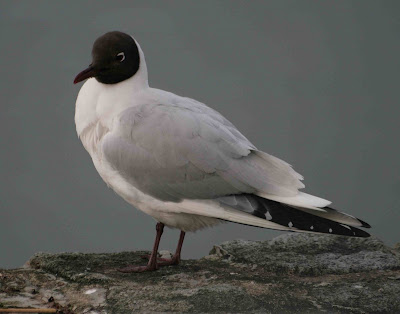 The majority, roughly 75% I'd say, of the second calendar year gulls (those that are nearing their very first birthday) look completely different, with their head pattern reminiscent of adult winter birds, large portions of their wing coverts and tertials still patterned in various shades of brown and a black terminal band to the tail. Legs and bill are comparable to winter adults but more orange. 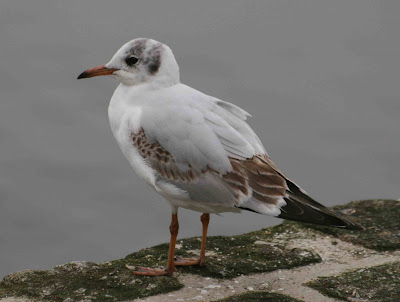 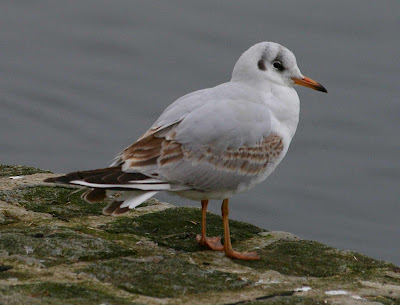 Also not a bird whose looks you'd call shabby, but also not a bird you'd call difficult to age, so where is the problem, Doctor Roeder?
You want problem? You need problem?
Here, I give you problem:

Some precocious immature Black-headed Gulls, and certainly not just a few, show a far more advanced plumage, although being exactly the same age as those immatures depicted above.
Here are a few examples of these advanced immatures: 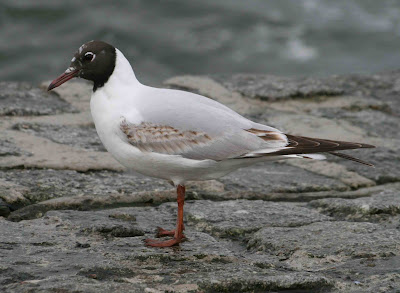 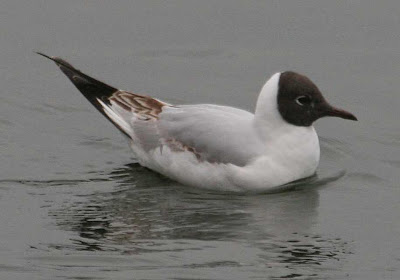 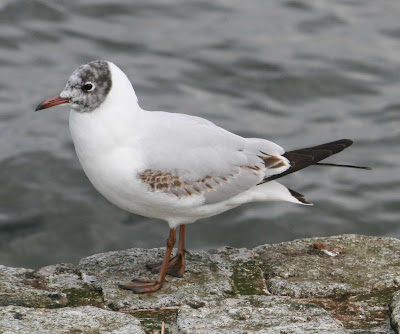 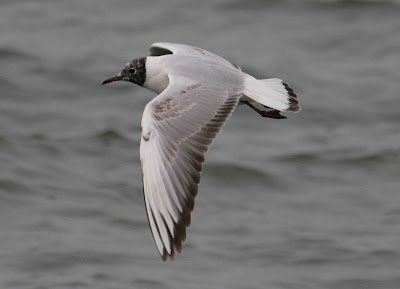 Looking at the classic ageing criteria

the amount of individual variation only leaves us with d) and e) to reliably age our gulls.

But to our utter amazemend, we may even find that some - though admittedly relatively few - individuals even moult part of their tertials as seen below, rendering d) at least slightly unreliable as a dead ringer for ageing second calendar year birds. 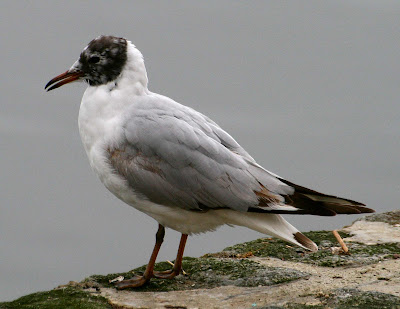 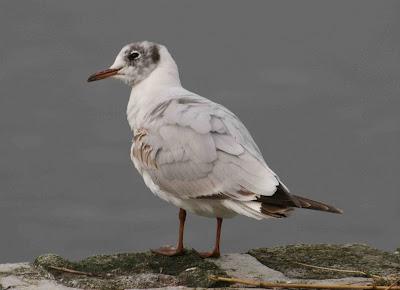 And e) the black terminal band to the tail?
Well, e) isn't all that reliable either!

The problem with the black terminal band on the tail is that quite a few immature gulls moult part of their tail feathers and exchange them for purely white adult-like ones by early spring (I once saw a bird that had one side of the tail completely white and the other one with a nice and pristine black band, quite a sight for sure) and the black tips also tend to break off through wear easily and often. Here are a few examples, and even though none show a completely white tail this would be well within the range of possibilities. 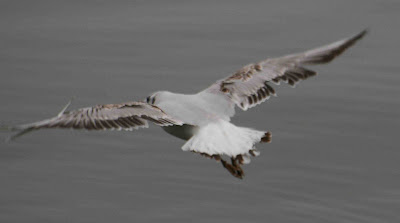 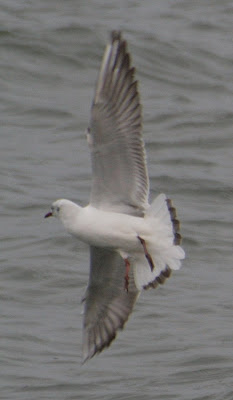 Rather unexpectedly, we are left with no reliable criterion whatsoever to age a Black-headed Gull in spring.
So what now, Mr. Extremely Knowledgeable?

Ha, I wasn't being completely honest before in that I concealed the f)-criterion from you: the flight feathers.

The flight feathers of adult and immature Black-headed Gulls differ quite obviously from one another and when seen clearly will always - as far as I know - allow you to age any Black-headed Gull. The primaries might look similar in some birds, although immatures tend to have the neat white pattern broken up into "windows" and broader stripes, but the pattern of the secondaries is always obvious:
The secondaries of adult Black-headed Gulls are always the colour of the wing coverts, forming a uniformly coloured upper wing. The secondaries of immature birds are very much darker grey than the wing coverts, providing the birds with a neat dark trailing edge to the wing.
Look for yourself how obvious that difference is: 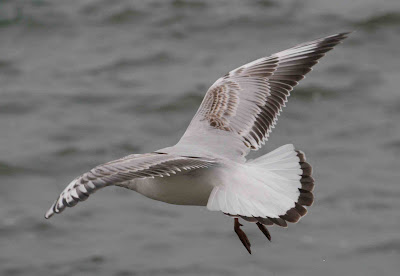 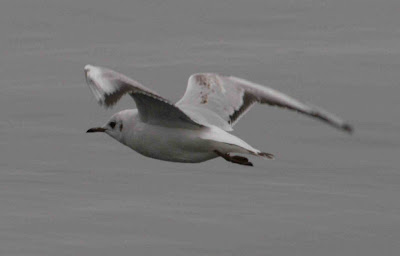 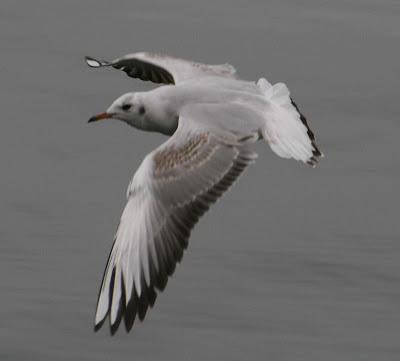 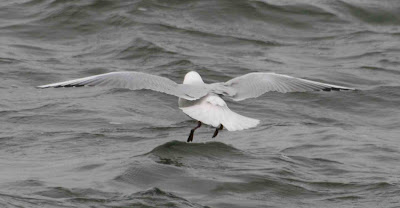 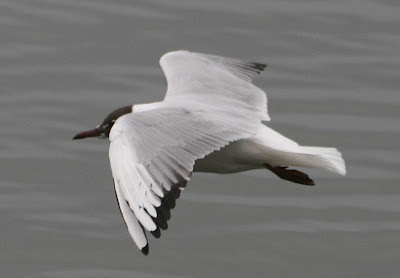 99.9999...% of the immatures you'll encounter will be rather easy to age without the pattern of the secondaries. There will always be some brown somewhere on the folded wing, the tail will either look obviously shabby/worn or have at least traces of the black band and the tertials will always be easy enough to see.
But then again, you could encounter such an extreme bird, and returning to our Cape Cross scenario, you ...no, wait, the other guy ... could potentially mistake an immature bird for an adult at long distance with the whole burden of proof that there really is only one bird present resting solely on your shoulder.
And I hope I was able to provide that bird ID shoulder of yours with a bit of a work-out opportunity here.

Bird ID physiotherapy - just one of the many ways we use to fix your birding ailments at the 10,000Birds Clinic.


P.S.: Unless you already knew, this may be shocking news for all you gullers out there. You might be a birder and still believe in the existence of Sea Gulls! 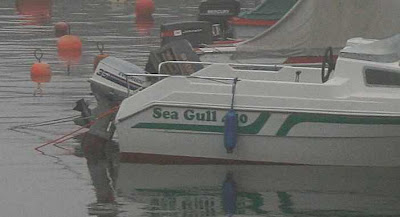 Don't be so humble, Dr, Roeder. I can only hold bins steady for about 10 seconds. Then I need a drink!

Hello. This post is likeable, and your blog is very interesting, congratulations :-). I will add in my blogroll =). If possible gives a last there on my blog, it is about the Dieta, I hope you enjoy. The address is http://dieta-brasil.blogspot.com. A hug.

Congrats on the 10,000 birds clinic and this was a long but great post! I learned a great deal from it!

Mike:
Ha! The secret behind seeing Cassowaries in Latin America?

You can easily reach 15 seconds by increasing the volume of the drink or the relative amount of the relevant additives. It's that easy!


Monarch:
Thanks, I think the clinic will be great fun, indeed! And I am happy to see you liked the post. As a matter of fact, and as you write it was long, this really is a stub I am slightly dissatisfied about. I have spent weeks behind the stroller now looking at Black-headed Gulls every day and feel I have learned quite a bit about their variation, but writing all of my ideas into one post would have meant a much, much longer post that no one would have been able to read to the end and then there is always the lack of time... We'll see, there might be more on Black-heads coming your way. And I really don't think there is a Greater Scaup in the picture and if so, this would be basically impossible to prove. Nice quizz!

Very nice. Should I run into a flock of Black-headed Gulls over here I'll be prepared.

That said, could you please send over a flock of BH Gulls? All previous attempts to see them in North Carolina have been epic failures.

Good luck Jochen. I hope you realize what you're letting yourself in for!! I reckon this new roll could become a full time job.
Get ready for lots of questions like - I've just seen a small brown bird with a brown body and brown wings, what do you think it is?

Where I typed 'roll' in my last reply, I of course meant to type 'role'.Doh!

N8, I'll try, the best I can.
Well, maybe you could string a BH Gull using this article as a reference after I basically wrote that all is variable. Come on, there must be some good immature Bonies out there right now that qualify to be turned into those fricking variable BH gulls?!

Rich, thanks for wishing me good luck, and I take your typo "roll" as in "roll with the punshes" (I really like that expression, we don't have anything equivalent in German).
Regarding your description:
Clearly a slender-billed curlew. Prove me wrong!
Cheers and happy birding trails!!

Hi Doctor! You'll do it great ;)
I'll stop by the clinic soon!
Greetings from Peru!

That should fit you well.I know that you often put a lot into your posts so being part of a team like 10,000 birds should be a good fit.I liked the article on Black-headed Gulls but I haven't seen any yet.-I did look for them a few times at a location where they are seen in late winter.-Good luck!-Now I'll move on to your next post.