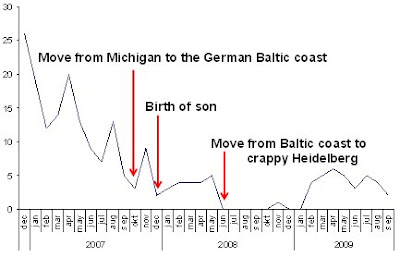 It's just that ... you know ... you're really good company - no matter where life takes me. And that's why blogging is such a special thing to do.
Posted by Jochen at 14:02

I think I need a similar graph for my blog...

You'll soon need it. Any day now, right?
All the very best to you and your wife for the journey ahead of you.

If you didn't comment some of my posts would have no comments at all. So keep commenting!

And someone is going to have to do a full-fledged study on the effects of becoming a parent on bird blogging. Either that or set up a charity to provide child care for bird bloggers...hey, now that's an idea!

Hey, I've been getting stalked, too.

The obvious solution is to move back to Ann Arbor, Jochen. The tower, the peregrines, and the Arb are all waiting for you.

Good luck in overcoming your slacker status regarding German birding posts. I'd like to do a similar graph on my bird and birding posts to see how it would look like.

So in other words what you are saying is:

1. you are a slacker.
2. You dont like where you are living.
3. You will make any excuse for not going birding.

Okay here is a solution: move back to Namibia or to SA. The cure is beer and braaivleis. It does wonders for the soul. :)Besides, your son will LOVE the animals. :)

@Corey: Okay, I promise I will. The problem with the study is that it needs to be conducted by someone who does not have young children or a blog as this would take up too much time for the study to be conducted thoroughly. However, an "outsider" might not have the pre-qualifications to do a good job.

@Corey and Nate: The child care charity is a good idea. all we have to do is find someone who has crap loads of money and no plan what to spend it on. Which surely can't be too difficult, right?
Right, guys?
Hello?

@John: dang! I knew if I started to mention people I'd forget someone. Geez. Will add you as soon as possible. I could now state that I had hoped my comments on your blog weren't quite as haunting as those on other blogs, but that would be lying... So, there's no excuse.
If there's anyone else who'd like to be linked to specifically and I haven't done so yet - look, I am a tired father, I forget. Just drop me a few lines!

@Wren: bouhouuuuuuuhouuuuuuuuu! I miss it so much. Actually, and I am serious, I can think of few places in North America that are as attractive as AA for a birder to live in: you're close to Pelee and Crane Creek/Magee Marsh, to LEMP, Point Moo, the boreal forest of the UP isn't far, there are fine grassland species around and the climate is okay, summers not too hot, winters not too cold.
So who knows, Wren, who knows...

@Amila. Thanks, I am going to need it. Well, now that you've taken over the ’surreal treatment of a birding subject in a blog’ theme, I'll have to find myself a new blogging niche, right? So German birding might be it - or do you have any plans of visiting Germany any time soon :-))

Moving to Namibia or SA?
I'd love to!!!!!!!!!!!!!
How about a nice house in Michigan from March to June and then a small game farm, you know, just a few hundred square kilometres somewhere in the SA bundu for the rest of the year? Sounds like a plan!


Cheers to you all!

when you coming to the alps?

Sound like an excellent idea Jochen. Need someone to run it for you? :)

I can attest that kids interfere with Birding in many ways. However I remember when my oldest daughter was about 4, and she was being a noisy 4 year old, I told her to lay down on the grass and be very still, because I wanted to get a better look at some vultures flying over...

Still looking fowards to seeing some nice posts about the awesome coloration of European Birds... Who knew there were that many shades of Gray and Brown?

Hey, we have a guest room if you want to come for visit.

@ Joan. I'll definitely need someone to look after my private game reserve in SA while I am away. Are you looking for a job and do you have an idea how much the SA government might charge me if I asked them to sell Krueger NP to me?

@ Will, hey that's an idea. You realize raptor fall migration has been slower than slow this year here at Heidelberg? and yes, only Europeans can fully appreciate the appeal of brown on gray.

I like the graph you did.I was just looking at how I stated off at 200 posts a year and dwindled down to about 45 a year.-You sure now how to get the gab going but I love your subtle and sometimes not so subtle sense of humor.-Good luck and I'll be looking forward to the comments.